Fuel Prices and Your Bottom Line 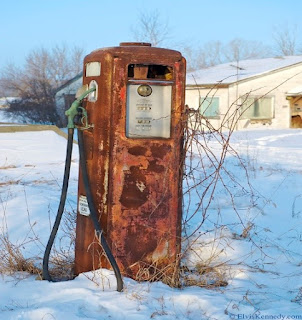 One would have to live in a coma to not feel the impact that the rise in fuel costs is having on the worldwide economy.  Let’s delve into how freight rates are calculated and why they are spiraling.

v  One important fact about freight that needs to be understood is that freight is a commodity.  It is supply versus demand, pure and simple.  The rates charged to a customer have specific inputs, such as insurance, overhead, equipment (tractor and trailer expenses), maintenance, and fuel.  But, by and large, the indicator that determines the final rate charged to the customer is how much that customer will pay to have their freight moved.

v  Fuel prices – anyone filling up at the pump is keenly aware of the impact that the increase is having.

o   What is your average fuel economy?  Do you get at least 35 mpg, better or worse?  Do you understand that semi-tractors get between 5 and 10 mpg, depending on their age, the weight they carry and other fuel efficiency capabilities?  Review this table to see how the changes in fuel prices impacts a driver’s fuel bill.

o   Using the first table, following is a table showing the amount that a driver is reimbursed using Landstar’s fuel surcharge rates.

o   How do freight rates work exactly?  A customer is charged for the linehaul, which is the price per mile to transport the freight from one location to another.  The customer will also be assessed the fuel surcharge fee for the fluctuation in fuel costs as shown in the previous bullet point.  Finally, there are accessory fees that are assessed by the carrier.  These range from tarping fees, securement fees, loading and unloading fees and more.

o   The fuel surcharge is payable to the party that owns the tractor (the truck).  This could be the carrier or the driver when the driver is an owner-operator.  Using the two tables already provided for the estimated fuel costs and the calculated fuel surcharge, review the following table to see what the fuel liability costs might look like.

o   Linehaul rates is the cost per mile that a customer is charged for the direct transportation of their freight from one point to the another.  There are a variety of reasons that impact linehaul rates.

o   Capacity constraints have been the largest area to impact the overall cost of freight in the last two years.  In 2019, prior to Covid, the US was experiencing a shortage of drivers across the nation.  One estimate indicated a shortage of one million drivers.  In today’s market, that estimate would be massively low.  The impact on the customer is simple.  Let’s assume that a customer has freight in Lubbock that delivers to Houston.  Let’s also assume that there are fifty similar loads shipping from Lubbock.  Finally, let’s assume that there is only one driver in the Lubbock area.  Those fifty customers will go into a bidding war to snag that one driver and that one driver can dictate his own rate.  The average rate of $1,500 for that area can easily zoom to $15,000.

o   Extra stops are a sticky subject for drivers.  For the most part, drivers want simple loads.  They don’t want to physically touch the freight, which means they don’t want to help load or unload the freight.  Drivers also don’t want to stop more than picking up the load from the shipper and dropping off the load to the consignee.

o   Location will always be an indicator that impacts the rate.  Metropolitan areas have better rates than rural areas.  It’s almost a simple matter of math.  There will be more drivers in a metropolitan area than a rural one.  The miles a driver must drive empty to and from a load is a consideration on the rate per mile.  This is referred to as deadhead.

o   Route length is another factor.  Basically, the rate per mile can be thought of as a daily rate.  A driver will want to earn a certain amount of money each day.  Assume that $1000 a day is an average rate that will provide the average driver their desired income and all other parties their equitable share.  The average linehaul rate per mile would be the $1000 divided by the number of miles driven that day.  The maximum average miles per day might be 600 miles, which makes the rate per mile $1.67.  However, a route that is only 250 miles means $4.00 per mile.  A driver will want the same amount of money on any given day no matter how many miles is driven.

o   Accessory charges are charges payable to the driver, usually, for performing an action that extends beyond driving the freight from one point to the next.  Some fees are not paid in full to the driver but are revenue streams for the carrier.

o   These accessories are related to load handling.

§  Pickup or delivery at non-standard times

o   Other accessory charges are related to load management.

o   One important accessory fee is when a truck is ordered and cancelled after the driver has been dispatched.  This is known as a TONU – Truck Ordered Not Used.

v  Margin is the final part of the rate picture.  Margin is basically profit.  It’s that part above the inputs that goes to the billing carrier.  In the Landstar world the margin is split between Landstar and the agent.

In determining the rate to charge a customer, I have an evaluation tool that I use.  It provides historical data for a given lane and the rates charged for the last 15 days, 30 days, 90 days, and 365 days.  It gives the average rate for a low-range, mid-range, and high-range for each of the four periods.

Following is a snapshot of this data for three routes.

As a freight agent dealing with drivers across the nation, I have noticed several trends in the last six months.

Ø  Lazy is a word that comes to mind, and it’s not used lightly.  Drivers have never been liberal with their willingness to do more than just drive.  It seems that they are less willing to do just that even with an increase in linehaul rates.  Let’s face it, a driver that works the trailer is a rare commodity.  Following is an example of the types of things that I deal with.

o   “There’s no loading dock?”  It is likely the driver will refuse the load, as he/she will have to touch the freight with a pallet jack.

o   “You want me to make extra stops (either pickup and/or delivery)?”  Most drivers won’t accept loads that include extra stops unless they are compensated to do so.

§  In the Landstar world, stop fees are a revenue fee and a driver will only receive a portion of the fee.  I don’t use stop fees to compensate a driver for extra stops for that reason.

Ø  Greed is another word that comes to mind.  There is valid justification for an increase in freight rates, but that doesn’t mean that all increases are valid.  In the previous example regarding capacity constraints, the carrier’s and driver’s costs are the same no matter what rate is negotiated.

o   Capacity constraints has been a major issue and has driven an increase in linehaul rates, however that doesn’t mean that all increases are based on hard inputs.

o   An abundance of loads compared to a lack of drivers means that a driver can charge a premium for their time, whether the justification is valid or not.

What can you do to reserve your bottom line while rates spiral out of control?  These are some areas to consider.

§  Keep track of your stock

§  Increase your inventory whenever possible

§  Be flexible and investigate alternatives

§  Avoid the need for deliveries with short lead times

§  When shipping less than truck load (LTL), coordinate shipping with other loads from the same shipper or region

o   Other things to consider

§  Be ready to deal with supply chain issues

v  Build a relationship with a carrier

o   Find a carrier that aligns your interests with theirs

Our goal with this post is to raise awareness on an issue that impacts your business today, tomorrow, and in the future.  Additionally, I’d like to share how we at Sommelier Logistics can help mitigate the impact that these areas have on your bottom line.

Ø  Sommelier Logistics maintains a lower cost structure to benefit our customers.  We do so by purchasing used equipment and by driving at reduced speeds.

Ø  When using contract carriers, our margin is the minimum allowable.

Popular posts from this blog

Story of Us Blog Post 7: Our Adventures Number 1 Part 3 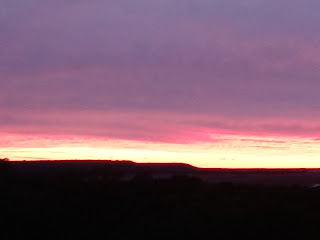 Our Adventures Number 1 Part 3 Will Rogers once said, "The farmer has to be an optimist or he wouldn’t still be a farmer."   I know that I’m an optimist and my crazy cynical husband has optimistic bones underneath, too.   This is the final installment to Our Adventures Number 1.   Part 1 detailed our December 16-19 weekend together and referenced working on our property and our pickup drama.   Part 2 detailed the story about our pickup drama.   Part 3 will now describe what we plan for our property and the progress that we’ve made to date, which includes what we finished on December 18. Our property is 20 acres of raw land with approximately 50% coverage of juniper shrubs.  Shrub is really too friendly of a term.  Juniper is part of the cypress family.  It can be a tree or a shrub.  When researching types of junipers, I have surmised that we are dealing with Ashe juniper, which occupies some 8 million or more acres of Texas land.  Ashe Juniper can grow from 33 to 49 feet i
Read more

Story of Us Blog Post 5: Our Adventures Number 1 Part 1 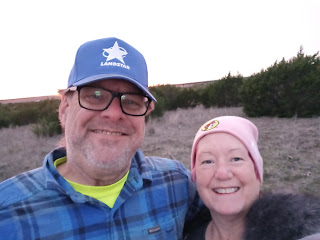 Our Adventures Number 1 Part 1 While visiting Les this past weekend, we were met with a series of 'adventures' as we call them, and Les mentioned that maybe we should start documenting our 'adventures'.  So, here we are, or so, here I am documenting our eventful weekend together.   Anyone familiar with our story is aware of our living arrangements.  Les is on the road around 330 days a year living his long-haul trucker dream.  That leaves 35 days more or less that he's at home or off the road in an official capacity.  We balance the 2 days a month with planned and impromptu visits throughout the state of Texas while he is technically still on the road.  Les is working on a dedicated project, and he spends the unloaded hours away from home at our property in Hico. Planning our weekend together started like it normally does.  We frequently talk throughout our days apart and discuss what activities we each do or have in the works.  We often talk finances, politics,
Read more

Peggy
I am married to Les Mauldin and we own a small trucking company that is leased to Landstar. We do what we can to provide a cost-effective shipping method for the Texas Wine Industry.